Natural Resource Management (NRM) refers to the sustainable management/utilization of major natural resources, such as soils, water, flora and fauna etc. Together, these resources provide the ecosystem services that provide better quality to human life. Natural resources provide fundamental life support, in the form of both consumptive and public-good services. Proving ecological processes to maintain soil productivity, nutrient recycling, the cleansing of air and water, and climatic cycles.

To manage your natural resources locally you have to know what they are and manage according to your land-use and those around you.

The following information is a brief introduction into the catchments average rainfall, groundwater and soil types though these vary considerably depending on your location. Our catchments other natural resources are discussed under our catchments assets

Rainfall
Rainfall varies greatly between the southern and northern parts of the catchment with an annual average of around 950mm closer to the coast, compared to 450mm in the north. Soil types also vary from north to south. The northern and central areas of the catchment are dominated by tertiary sediments over granitic bedrock and the terrain is undulating with low lying stagnant flats. Whilst in the southern parts the soils are derived from granitic material and the landscape is more dissected.

Groundwater flow systems are local and roughly align with the direction of surface drainage. The more dissected areas have a high groundwater gradient, which allows groundwater to move towards low-lying discharge areas such as creeks and valley floors. Shallow bedrock can partially obstruct groundwater flow and causes hillside seeps in this region. Dykes and shear zones may also affect groundwater flows.

Groundwater levels have had a rising trend. This trend continues until valley floors and creek lines become discharge zones and discharge rate equals the rate of recharge in upper parts of the areas. Salinity, inundation and water logging affects discharge zones and their fringes, where groundwater is <1.5m from the soil surface.
​
Because groundwater flow systems are local, the salinity issues are caused by recharge in the nearby areas. Treatment of recharge zones in this area will have a quick effect on salinity of landscape and groundwater levels will start to drop a few years after treatments. Growing perennial pastures are the best option in the Oyster Harbour Catchment area. Lucerne is the best perennial for reducing recharge and using groundwater, and Kikuyu is the next best option.

The most common soil supergroup in the Oyster Harbour Catchment is the ironstone gravelly soils representing 28 percent of this area, followed by deep sandy duplexes (20 percent), deep sands (13 percent) and wet or waterlogged soils (12 percent).

​Soil groups are defined within soil super groups and are used to identify the soil component of the land resource datasets maintained by the Department of Primary Industries and Regional Development. Duplex sandy gravel, grey deep sandy duplex and pale deep sandy soils are the most common soil groups in this area, together covering 44 per cent of the Oyster Harbour Catchment (Table 2). All other soils were found in less than 9 per cent. 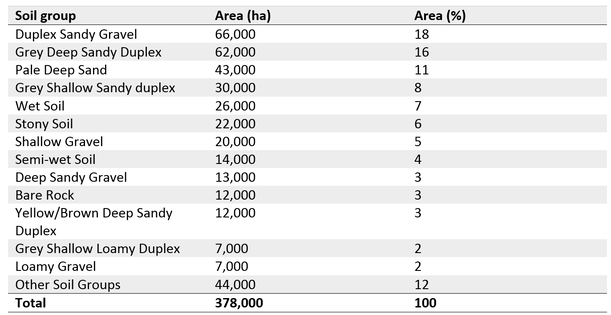 ​Major soil degradation hazards in this area include subsurface soil compaction, water repellence, soil acidity, water erosion and wind erosion.
Further information can be found on the Resources page or in our office library