The Tally aims to improve our knowledge and awareness of critically endangered western ringtail possums living in urban areas. Citizen scientists are engaged every year to record sightings of possums in their local area over a 4 week period during April to May. The results are shared with the wider community in the form of an infographic and recorded on the WA Threatened Species Database.

The information gained from the Tally is building a reliable set of observation data that will improve our knowledge about where western ringtail possums are found and in what numbers. This information is then used as a reference for population trends, future planning decisions and conservation projects. The data becomes more valuable each year the Tally is repeated. A Summary Report collates the data findings from the first seven tallies completed.

The Ringtail Tally was established by GeoCatch in 2016, in partnership with Department of Biodiversity, Conservation and Attractions (DBCA). The Tally has since expanded beyond the Geographe Bay Catchment area. to include Nature Conservation Margaret River, Leschenault Catchment Council, Wirambi Landcare and us, Oyster Harbour Catchment Group now run the tally with their local communities, making it a truly regional event.

The ongoing success of the Tally is not possible without the generous contribution of community participants, DBCA and partner organisations. To register your interest in learning more about our Western ringtail possums and potential joining in the next tally sign up to our email list via CONTACT US. 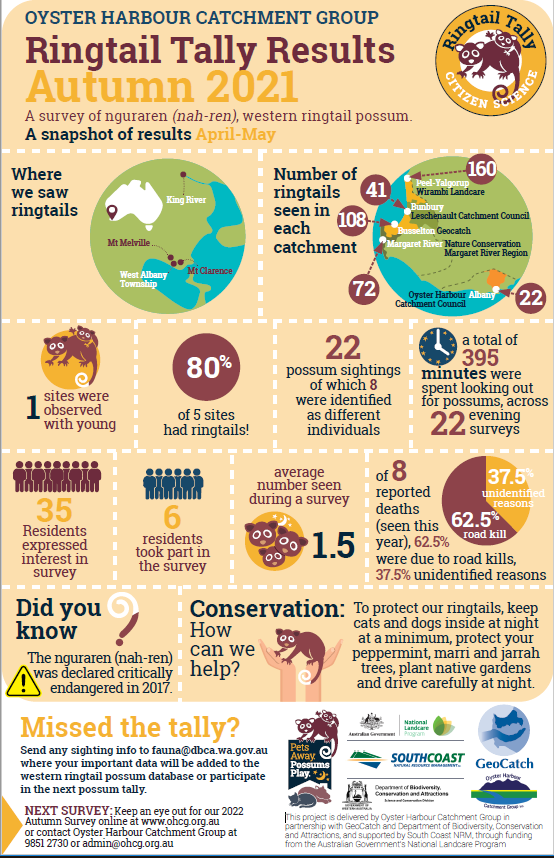