Submerged aquatic vegetation is the term used to describe rooted, aquatic flowering plants which include true seagrasses and freshwater plants.  These plants perform a number of important ecological functions in both estuarine and freshwater systems and generally their presence in a system is considered a good thing. The vegetation influences the quality of the water and sediments by taking up nutrients and reducing sediment re-suspension. They also provide a refuge for macroinvertebrates and fish, and food for fish and wading birds, such as the Black Swan. 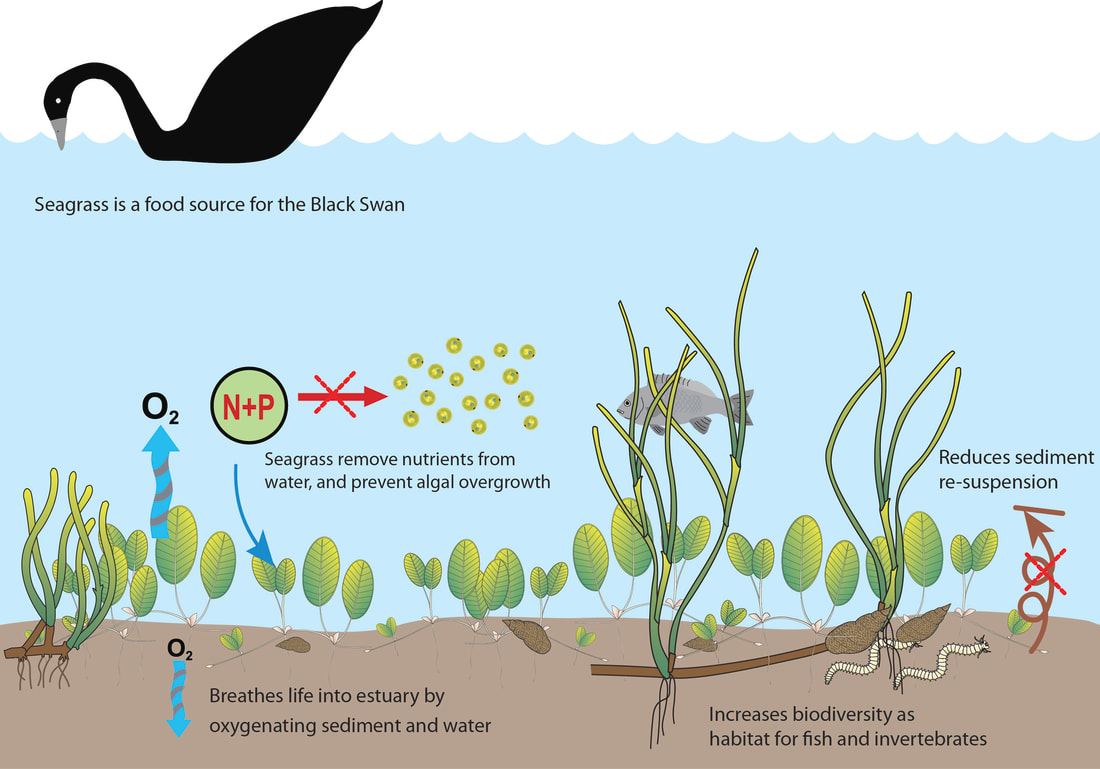 Seagrasses are increasingly being used as a tool to describe estuary condition. The distribution and species present within an estuary are dependent on a range of conditions such as water movement, sediment condition, fresh water supply and connectivity to the ocean. These aspects vary from estuary to estuary, so we expect seagrass communities to differ between estuaries.
There are common factors that influence the distribution of aquatic plants. These include changes in light, nutrient availability, grazing pressure, flood events and direct physical disturbance by humans.
Loss of seagrass habitat is generally equated with ecosystem decline and is most frequently linked to eutrophication (nutrient and organic loading) from the catchment. Phytoplankton blooms and excessive growth of macroalgae are both symptoms of eutrophication. Both phytoplankton and macroalgae reduce light availability for seagrass growth which in extreme cases can lead to seagrass loss due to shading effects.

The Department of Water assesses the state of seagrass communities by measuring changes in the species composition, distribution and cover of the seagrass communities in the estuary. The department has also identified more complex physiological indicators such as productivity, reproductive success and tissue nutrient content to describe the resilience of seagrass. This information is important as it tells us if seagrass habitats are being lost and if this loss is permanent or recoverable. 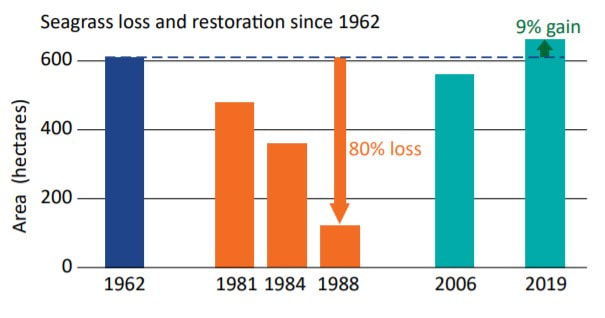 ​Water quality in Oyster Harbour declined in the late 1970s and ’80s due to catchment clearing and excessive nutrient inputs, which also led to extensive loss of seagrass. Seagrass has recovered remarkably in the last 20 years due to significant seagrass transplanting and improved catchment management activities, resulting in better water quality.

Today, Oyster Harbour generally has very good water quality. It is free from nuisance microalgal blooms, fish kills and concentrations of low oxygen, and is a success story of improved water quality in an estuarine environment.

Seagrass habitat in Oyster Harbour is dominated by Posidonia australis and Posidonia sinuosa. In 1962, these varieties covered an area of 610 hectares.19 By 1988, 80 per cent of the seagrass cover was lost, mainly due to nutrient enrichment causing excessive epiphyte growth and resultant light reduction. Nutrient enrichment was attributed to extensive catchment clearing and expansion of agricultural activities in the post-war period. A recent survey of seagrass in Oyster Harbour has shown there has been an incredible recovery of habitat, with seagrass now covering an area of 663 hectares – nine per cent more than in 1962. The recovery is due to the improvement of catchment management practices, and a sustained 20-year seagrass transplanting effort.

The expanded aquaculture development zone covers a significant area of seagrass habitat: 196 hectares. This is 30 per cent of the seagrass area mapped in 2019, and includes meadows of seagrass which were transplanted as part of the restoration effort. Considering the worldwide decline in seagrass habitat, the seagrass recovery in Oyster Harbour is remarkable. It bodes well for the capacity of estuarine environments to recover from eutrophication when appropriate management actions are undertaken.
See more: seagrassrestorationnetwork.com/oyster-harbour-wahttps://seagrassrestorationnetwork.com/oyster-harbour-wa
Carbon Capture Ability:
Seagrass meadows capture carbon at a greater rate than tropical rainforests. They cover just 0.1% of the seafloor, yet account for 11% of the organic carbon buried in the ocean. And because they sequester it into the sediment, that’s where it remains.