Soil erosion is not only a threat to agriculture’s productivity but a major environmental threat to sustainability.

Soil is a natural resource that may look robust and endless, but is in fact the fragile product of thousands of years of formation especially the highly weathered south western Australian soils. Topsoil, which lies closest to the surface of the land, contains essential nutrients for crops and native plants. It is this layer of soil that is endangered by wind and water erosion.

Soil erosion decreases soil fertility, which can negatively affect crop yields. It also sends soil-laden water downstream, which can create heavy layers of sediment potentially chocking the downstream estuary or that prevent streams and rivers from flowing smoothly and can eventually lead to flooding. Once soil erosion occurs, it is more likely to happen again.

Financial losses incurred by soil erosion, and the cost of fixing it, mean that erosion prevention is a much better option than remediation. ​

The 3 main principles to control erosion are to:
Land capability
Soil erosion can be avoided by using land within its capability.
The land’s position, soil type and slope determine how vulnerable it will be to erosion. It may not be suitable for agriculture, or suitable only for an activity which limits erosion. To examine your soil in particular, compare your data and examine soil relationships we recommend using tools provided on www.soilquality.org.au/. 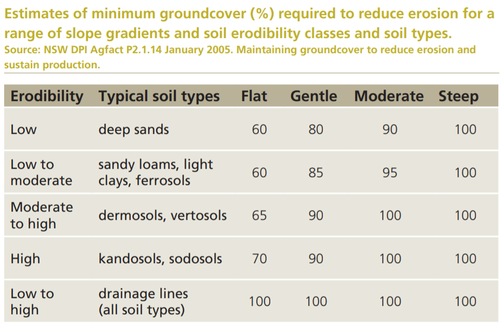 Surface cover
Surface cover is a major factor to control erosion because it reduces the impact of raindrops falling on bare soils and wind removing soil particles. It also reduces the speed of water flowing over the land. Erosion risk is significantly reduced when there is more than 30% soil cover. Total cover is achievable for many grazing and cropping systems if managed carefully.

The best way to maintain good groundcover is to select plants that are well adapted to the climate, the soil and the farming system, so that they persist without a lot of attention. You also need to look at your management practices to limit actions that ; high traffic (animal and machinery), tillage, over-grazing, fire etc. where possible/where the soil is vulnerable to erosion. 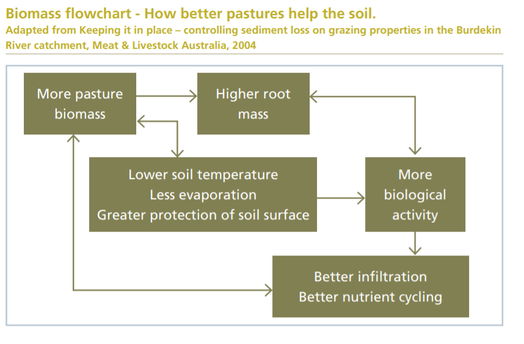 Effective management practices you can use:The size of a plant’s root system is proportionate to its size above ground. Pastures kept continuously cropped short have shallower root systems, and are less productive, more susceptible to drought and at risk of developing bare patches. Also more diverse the pasture species, the more productive and less vulnerable .
At excessive stocking rates, production is at the expense of soil resources so soils will degrade over time. Whatever the groundcover goal, the actual number of animals that a pasture can sustain varies from season to season.Continuous or set stocking of pastures is not generally recommended because of the potential for overgrazing and erosion. Research has found that resting pastures from grazing has enormous benefits for both pasture and soil.Some degree of soil compaction from the impact of hooves is inevitable with livestock production but also heavy machinery. Compaction compresses air spaces in the soil, making it difficult for water or plant roots to move in the soil, so pasture growth slows, leading to reduced groundcover and increased erosion.​Fencing paddocks according to their susceptibility to erosion makes it easier to prevent erosion. Traditional ‘square’ paddocks that contain more than one soil type or slope make erosion management difficult. Try to fence land so that each paddock has similar characteristics, for example all flat, all slope, all sandy soil, or all heavy clay.

On hot days, stock prefer shade to sun and will gather under any tree available. These camps lead to trampled groundcover and denuded soil, making the soil very prone to erosion. By planting several shade areas, the impact of the cattle camps is spread over a wider area, and there is less chance of severe erosion.Stock often form tracks in paddocks and these need to be monitored because once a track is worn lower than the pasture, it can concentrate runoff and scour out quickly. Management options include placing obstacles across the track, fencing it off, moving watering points or rotating to different paddockTo promote a green pick, slash and mulch pasture rather than burn it, because the cut vegetation contributes to protective groundcover and adds organic matter to the soil as it breaks down. Regular burning depletes groundcover, organic matter and plant nutrients and leads to long term soil degradation.
Runoff Management
Landholder should have a drainage plan that potentially includes:
• drainage and discharge of excess runoff into water body i.e. dam or wetland
• problem areas such as waterlogged spots and steep areas
• location of planting areas
• tree row orientation (planned and existing)
• windbreak location
• design and location of access tracks
​• location of existing infrastructure.
Read more:
Saving soil: A landholder’s guide to preventing and repairing soil erosion
Wind erosion in WA, Department of Primary Industries and Regional Development
Water erosion in WA, Department of Primary Industries and Regional Development
Sediment in streams 2000 Water note
Role of sediments in nutrient cycling
Sediment quality in three south-western Australian estuaries : a technical report for the project : Tracking acid sulphate soils on the WA coast 2010
​River Restoration Manual No.10 Stream stabilisation.
Water Note 18: Livestock management – fence location and grazing control,
Waternote 19: Flood proofing fencing for waterways,
Water note 6: Livestock management – construction of livestock crossings
​Waternote 7: Livestock management – watering points and pumps