The Western Ringtail Possum (Pseudocheirus occidentalis) is a critically endangered arboreal marsupial that is only found in South Western Australia.
​
While once widespread from Perth to Albany, this species is now listed as critically endangered. It has been estimated that the remaining population size in the wild is less than 8,000 mature individuals, with a decreasing trend. Recent research predicts there is a 92% likelihood that they will be extinct within 20 years if action to protect populations and their habitat isn’t enacted immediately. This decline has been contributed to habitat loss, degradation, fragmentation, predation by introduced predators (notably foxes and cats), increased resource competition (e.g. hollow competition), and climate change.

The Western Ringtail Possum occurs in the highest densities in coastal zones, where Peppermint trees (Agonis flexuosa) are a dominant species. Smaller populations occur within Jarrah Marri vegetation, including inland populations. Porongurup Range National Park used to be one such populations though has been speculated to have gone locally extinct due to lack of significant number of sightings.
You can also help this species by participating in:
Here are some useful resources:​
Spotlighting guide
Backyard guide
Whether you live on an urban block with a small garden; adjacent to an area of bushland or have a large rural property, you can contribute to Western ringtail possum conservation by counting the possums you see.

The Annual Tally is carried out every year in April-May but you can submit sighting outside of these months on INaturalist.org.au

Sightings are shared with the wider community and recorded on the WA Threatened Species Database. The information gained from observation data that will improve our knowledge about where Western Ringtail Possums are found and in what numbers.

The Tally has expanded beyond the original Geographe Bay Catchment area, to now include Nature Conservation Margaret River, Leschenault Catchment Council, Wirambi Landcare and Oyster Harbour Catchment area. Making it a truly regional event and an opportunity to be involved in something bigger. ​
See more about how it originated: ​https://www.geocatch.asn.au/living-with-possums/possum-tally/ 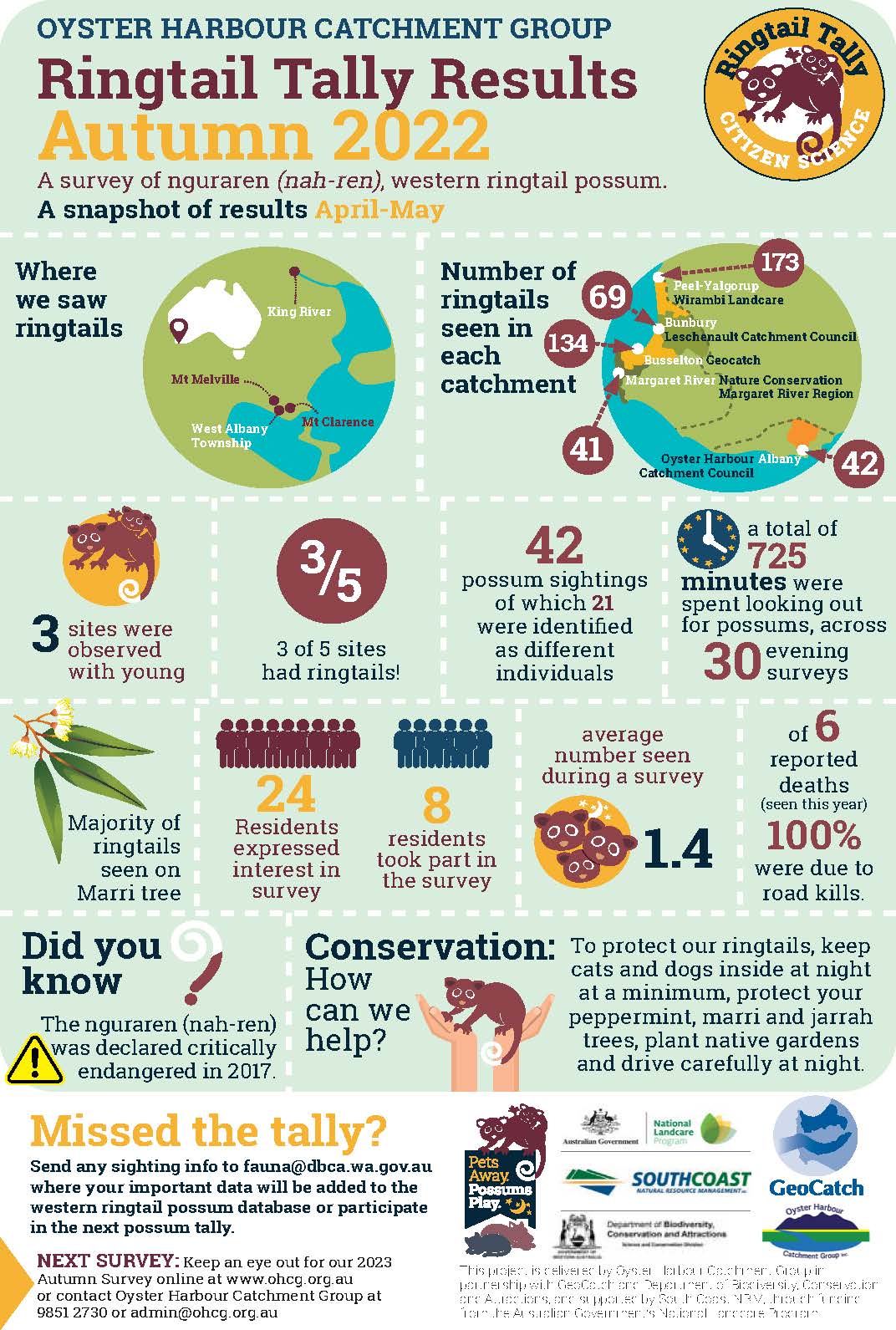 The Ringtail Tally has been delivered in other hotspots since 2016.  The popular event is now been expanded to include Albany and surrounds and others cover across the range of the western ringtail possum using the same methodology.
Those who participate as citizen scientists are contributing invaluable data to help further conserve this species into the future.
​
Find out about other tally events occurring in the range of the ringtail and about how the tally started here: https://bit.ly/3paqheL
Find out more about past projects that increased our knowledge of our local population and awareness;
2021 Ringtail tally results
Filling in the gaps: Porongurups
Greater Understanding: Emu point and Bayonet Head
Core Albany Possums