What is an Invasive Plant/Weed?

"A weed is a plant growing where it is not wanted. Any plant can become a weed"

A weed/ invasive plant is any plant that requires some form of action to reduce its effect on the economy, the environment, human health or amenity. Many plants introduced into Australia in the last 200 years are now weeds. Weeds typically produce large numbers of seeds, assisting their spread. They are often excellent at surviving and reproducing in disturbed environments and are commonly the first species to colonise and dominate in these conditions. A weed can be an exotic species or a native species that colonises and persists in an ecosystem in which it did not previously exist.

Weeds pose a serious risk for primary producers as they can impact on market access and agricultural production.
In 2006/07, each Western Australian agricultural business spent an average of $29 376 ($341 million total) on weed control (Australian Bureau of Statistics).

Controlling these weeds is a shared responsibility between landholders, grower groups, biosecurity groups and the Department of Primary Industries and Regional Development.

How do I prevent the Spread of weeds?

In Western Australia many Weeds of National Significance are also declared pests under the Biosecurity and Agriculture Management Act 2007 and legally have to be managed by landholders.

To protect Western Australia’s agriculture the Department of Primary Industries and Regional Development:
For advice on Weeds of National Significance in Western Australia search their website, the Western Australian Organism List or contact our Pest and Disease Information Service (PaDIS). 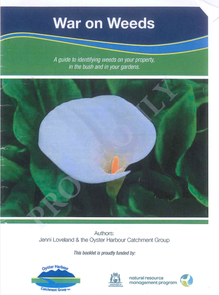 Our catchment is rich in natural assets such as King river, Kalgan river, Porongurup national park, the Stirling ranges as well as 31 nature reserves and 38 heritage sites. It’s particularly known for its biodiversity, located in an internationally recognised biodiversity hotspot. Unfortunately, many of our endemic plants are at risk due to invasive weeds dominating the landscape.

Spring is a great burst of colour which can be used to identify many different type of flowering plants both native and weeds. While your out in the bush or on your property keep an eye out for the invaders and try to control them before they go to seed.

If you need help with this Oyster Harbour Catchment Group has made a weed booklet to help, if you would like one make sure you become a member.