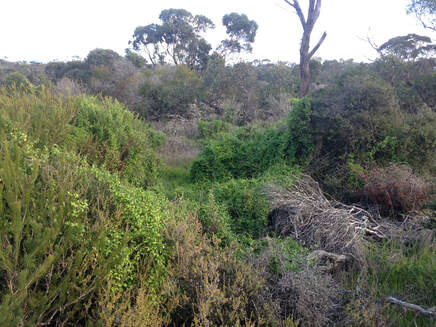 Bridal creeper entered the country as a garden plant and is now a major weed of bushland in southern Australia, where its climbing stems and foliage smother native plants. This plant has been declared a Weed of National Significance. It is regarded as one of the worst weeds in Australia because of its invasiveness, potential for spread, and economic and environmental impacts. It invades undisturbed habitats and is a major threat to most low shrubs and groundcover plants in Mallee, dry sclerophyll forest and heath vegetation. In South Australia and southwestern Western Australia bridal creeper is considered the most important weed threat to biodiversity. It also causes losses to primary industries eg by shading citrus and avocado trees and interfering with fruit picking.

​As part of this project 200ha of bridal control in the priority sites between the Stirling and Porongurup Range over a series of years with using different control methods. All of which is covered in Janicke, S. & Janicke G. 2018 “A Review of Bridal Creeper Control in the Southwest of Western Australia. The extent, control methodologies and outcomes”. This report surveyed 160ha creating a comprehensive overview that will hopefully contribute to informed practices though out the area. This report particularly identifies the need for rust control and other ongoing control, the impact on plant health from other activities (i.e. roadside grading) which group will focus on in the future.