In Western Australia the first of what can be called the ‘modern’ era of landcare groups formed in 1983, as formal Soil Conservation Districts gazetted under the Soil and Land Conservation Act. By 1988 the movement had grown to over 90 groups, with claims that over 60 per cent of farmers and 90 per cent of pastoralists were involved in their local groups (Robertson 1988). While the essence of these early landcare groups was landholders working together with other landholders, government agencies were key players in their establishment and operations, providing funding, advice and support in coordinating activities. For example, WA Department of Agriculture officers functioned as ex-officio members of the local Land Conservation District Committees (LCDCs).

Inland of Albany, Western Australia, three of these landholder-based LCDCs were established (Kalgan, Napier/King and Manypeaks all with numerous sub-catchment committees) and functioning by the late 1980s, focused on issues such as salinity, soil acidification and wind erosion. Severe eutrophication problems, causing huge loss of seagrass and fish populations and much more, affecting the community in Albany, led to the state government establishing an Albany Harbours program and encouraging the LCDCs to work together over the Oyster Harbour catchment, which covers some 380,000 hectares and extends almost 100 kms inland from Albany, and includes both rural and urban areas (Figure 1). In 1990, at the behest of the Manypeaks LCDC, a meeting was held at which a committee was formed ‘to oversee the management of the Kalgan and King River Catchment area’, the King and Kalgan Rivers being the major watercourses flowing into Oyster Harbour.1 At the group’s inaugural meeting, it was noted that the committee ‘had no legislative direction and wished to work closely with farmers’; support was pledged from the Department of Agriculture.2 The new committee initially styled itself the Oyster Harbour Catchment Committee, and quickly took on awareness-raising, research and coordination roles, growing in importance as the overall CLLM group for the entire catchment and moving to more hands-on roles in fencing, soil testing and water quality monitoring in particular.

Incorporating in 1994 as the Oyster Harbour Catchment Group (OHCG) they have always worked closely with other organisations within the catchment: at first the LCDCs, and over time with groups focused on specific waterways, such as the King River Restoration Group and the Kalgan River Stewards, groups largely drawn from the urban population, such as the Friends of Emu Point, and similar rural groups such as the Friends of the Porongurup Range. The OHCG over time has included representatives of such community groups and government departments. Efforts to protect the waterways and improve management of the larger catchment since the 1980s have led to a dramatic improvement in the health of the catchment, the rivers and the Oyster Harbour (Department of Water and Environmental Regulation 2021).

In the years since they were first encouraged by the government to form on a catchment basis, and provided with administrative support, they have lost all core funding. OHCG survives financially through undertaking specific projects, effectively becoming the fee for service contractor for government identified by Hajkowicz in 2009. The Commonwealth government has increasingly tied funding to specific rare and endangered species programs, rather than broader environmental efforts, and delivered funding to the OHCG’s area through a regional NRM organisation whose remit spans over 9.6 million hectares of land and sea (South Coast NRM 2021). Reliance on this funding has diminished greatly in recent years, as it was costing OHCG to act as a contractor as well as not meeting the needs of local landholders. This contrasts with earlier periods, such as 2007–2013, where funding was more readily available for OHCG priorities, including terrestrial biodiversity protection and restoration.

Most of the river and main streams are now fenced, soil testing to reduce fertiliser loss is now a common practice and many bushland areas have been fenced, protected from livestock and extended with revegetation. Downstream, the seagrass beds in Oyster Harbour have recovered (Cambridge, Bastyan, and Walker 2002) and there is little sign of the damaging macro algae that was present in the 1980s (Bennett et al. 2021). As a catchment-sized group, with many layers of responsibility and the need to connect and communicate with a wide range of groups and individuals, OHCG needs to conduct its work through the efforts of two to three part-time paid staff as well as volunteers both in its oversight committee as well as members on the ground.

In 2008 the group won the National Landcare Community Group Award – a very high level of recognition for their work – and developed ambitious plans to restore ecological connectivity between the two major national parks in the catchment, attracting some corporate sponsorship for that work.

​The group has achieved some fantastic results in the past with a wide range of on-ground activities. These include fencing of waterways and remnant vegetation, rehabilitation of  remnant vegetation, re-vegetation using native species of local provenance, flora and fauna surveys, control of invasive species including weeds and feral animals, soil testing to aid in the reduction of nutrients leaching into waterways, establishment of perennial pastures to intercept and utilise excess water and nutrients, constructing designed earthworks to address salinity or water logging.

The OHCG has an important role in actively educating landholders,  school groups and the wider community on environmental issues, the benefits of conservation and appropriate land management. The group has also been involved in all levels of regional planning and is involved with further developing and implementing the Southern prospect (South Coast NRM regional strategy).

*this history was extracted from the paper linked below. 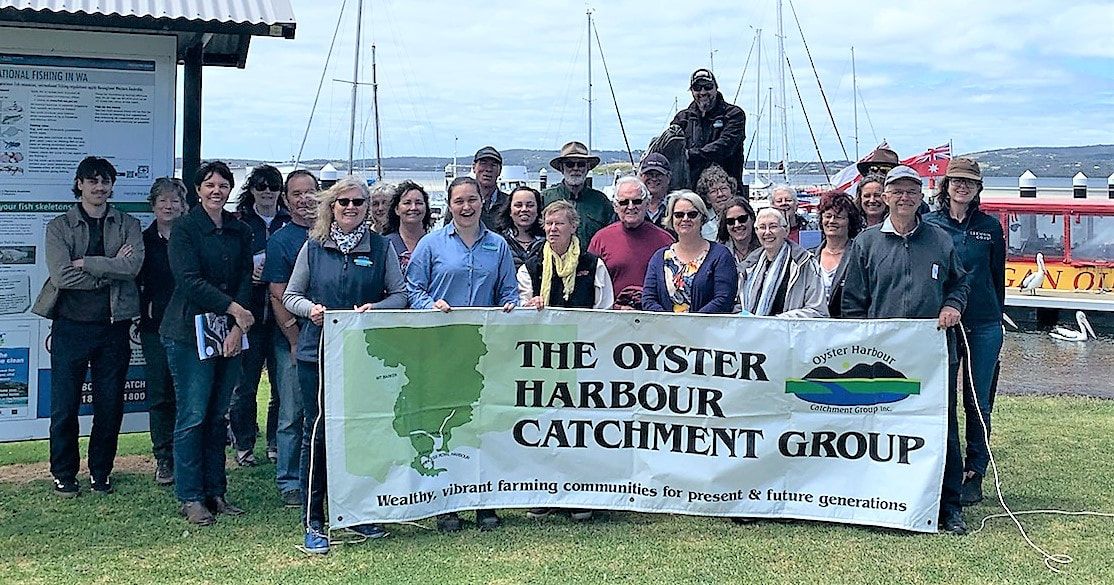 We continue to do these works driven by our volunteer committee that currently consists of farmers,  scientists and NRM specialists, interested community members and other stake holders. As available funding, particularly core coordination funding, became more restricted OHCG has had to limit its ambition, and operation. In recent years the state government has allocated significant funding for work that specifically protects and improves the health of water flowing to the estuary, and this now forms the bulk of the work undertaken by OHCG, enabling them to employ project officers for those specific tasks. Into the future OHCG will be trying to continue to move away from being so reliant on government agendas, implementing a more philanthropic-model via getting their DGR status so they can continue to serve the community based on landscape-scape need, helping fostered a prosperous, vibrant community for present and future generations within the Oyster Harbour Catchment through natural resource management.

The Oyster Harbour Catchment Group partners with many organisations and is currently mainly funded by the State and Australian Governments through programs such as the National Landcare Program, Healthy Estuaries Initiative and NRM grants.

The National Landcare Directory (NLD) is a directory of community environmental 'care' groups across Australia, including Landcare networks and support organisations. More than 11,000 Junior Landcare groups and schools, and 5,400 Landcare, Coastcare and community groups are registered on the directory. The groups that fall under the Landcare umbrella are varied in nature, including our sub-brand Coastcare, as well as productive farming groups, 'Friends of', Bushcare, Rivercare, Dunecare and indigenous ranger groups. The National Landcare Directory helps you search for groups by name, suburb, or postcode.
​
This local groups include: Friends of the Porongurup Range, Wilson Inlet Catchment Group, South Coast NRM etc...
Click here to go to the National Landcare Directory